I seem to have let blogging slip away for a few weeks.  It was good to have a few days break and spend time with friends but that meant I had much more to catch up in the subsequent weeks.

At the previous week’s Women for Peace session, we discussed the applications, differences and impacts of persuasion and manipulation.  For this we played ‘Break into the Circle’ to look at different (non-violent) tactics we use to join a group.  I was told for this activity I do not need to take part which I felt was ironic and exclusionary in itself, and left we wondering about the point of the exercise!  Then we took part in a continuums exercise where we were given statements to think about. These were about shopping in sales, finding a bargain, and how much we are able to resist the manipulation attempts of shops and big companies.  Afterwards we applied the differences between manipulation and persuasion in our everyday lives in our families, work places or other social interactions.

Following this we role played as ‘Angel v Devil’; we each had a chance to play the ‘angel’, the ‘devil’, and to be the ‘listener’, using the ‘My Former Life’ film scenarios.  Although the group thought that it was easier to persuade people to take the ‘bad’ path as it sounded more exciting, for me the exercise reinforced the fact that I do not like or enjoy either manipulation or persuasion.  This might be because I have been subjected to both and know how damaging the power struggle is for the recipients.  So I wouldn’t wish to put anyone through a manipulation or persuasion scenario.  We finally thought about ways that we can resist persuasion and/or manipulation, for example, by being intuitive, informed, being able to challenge and question the ‘persuasive’ ideas presented, and listening to multiple viewpoints. Over the years, I have trained myself to be more critical and not respond reactively, however I don’t always achieve this! It’s a work in progress.

At the next session we examined the messages contained in various ‘memes’ – random images used on social media with text attached, with the intention of influencing our decisions and making us think a specific way about a point of view.  Then we watched films of Anne Choudary (from the now banned group Al-Muhajiroun), Jayda Fransen (Britain First) and Donald Trump to discuss how their words and messages have the potential to influence and persuade public opinion.  The last two especially use skilled manipulation, playing on people’s emotions of fear and anger. It made me feel really uncomfortable and I found their messages toxic. It’s such a shame that so many members of the public can be so easily persuaded by these people.

The differences and the impacts of critical thinking and impulsive thinking were then discussed in the group.  I feel as our first instinct, we all have the tendency to think impulsively, however after a fair bit of reflection, training and life experience our thinking usually becomes more critical, allowing us the benefits of making more informed decisions. 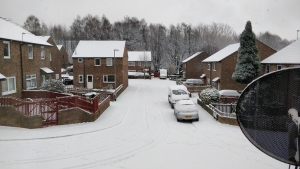 We had lots of snow last week, which meant events were cancelled and I wasn’t able to go out for a few days.  Snow can be pretty, it makes everything bright and shiny, reflecting the light, but that’s only on an aesthetic level. Walking on snow and ice is impossible for me, and I consider snow as a key barrier in the winter, preventing me from going out, however I made the most of being home.  I finished the first draft of a chapter I am writing on challenges I face as an independent academic outside academia and how the oppression I experience has given me the impetus and strength to become an activist bringing about social change in academia.  Although the experience of writing about my difficulties was a bit depressing, at the same time I found it to be empowering and cathartic writing about the discrimination I have faced in my career as an independent researcher.  I also took the opportunity to review the revised versions of two articles I had reviewed previously.  We ended the week by going to the Left Bank Centre for an hour of reflection on Sunday.  Having the quiet time and space to meditate and reflect on the past week was restoring for the soul and refreshing for the body. 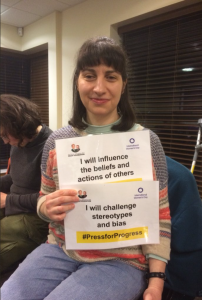 Today was the International Women’s Day and there were lots of celebrations going on in Leeds.  I do wonder though how many of these events have been inclusive of and accessible to disabled women. I also wonder whether or not there has been a recognition of the women who are not able to join in public life and especially attend today’s celebrations, be it because of mental health issues, access and attitudinal barriers, lack of support or care giving responsibilities.  Surely disabled women and their female care givers have as much entitlement to the sisterhood as their non-disabled counter-parts, and their diverse needs have to be acknowledged and respected.