We started the previous week’s Women for Peace session by playing a game, where in two teams we were trying to grab the pen first, by passing a message down the line.  Following the game, we discussed how easy it was to pass a message along, but we felt responsible when we had to retract a false message.  Since my hands sometimes jerk uncontrollably, I felt pressured and responsible for our group, luckily our group won! We then talked through two methods of holding difficult conversations with another person – the Dialogue Model, and I Statements. 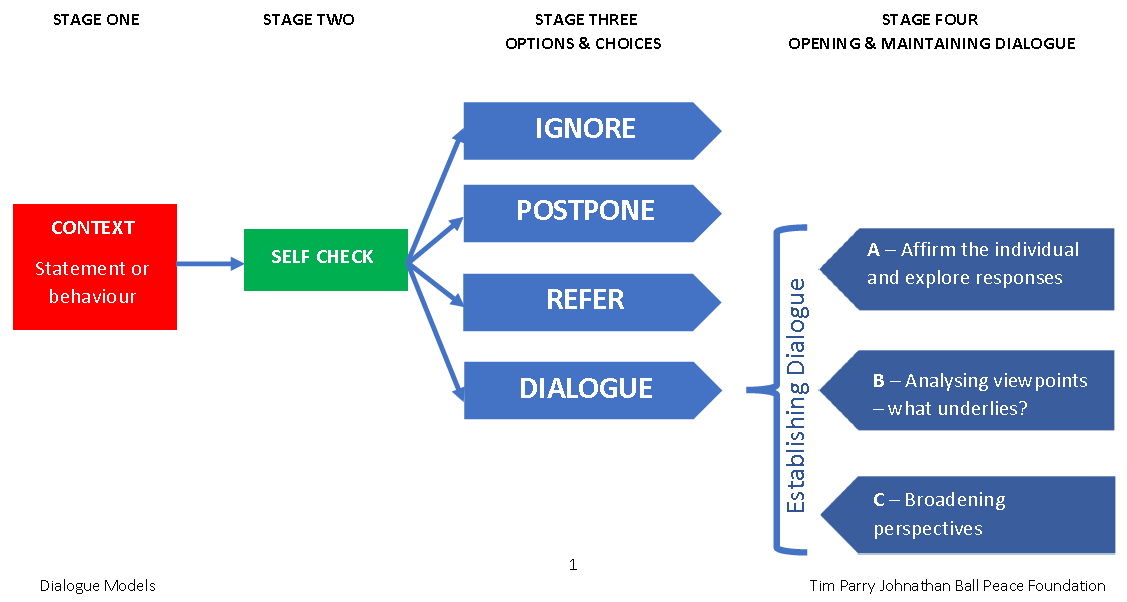 The Dialogue model is a useful way to address a comment that a person has made that we don’t feel comfortable with like a disablist comment/opinion. The model follows four stages of ignore, postpone, refer or dialogue in order to take us through a constructive dialogue about a topic.  The ‘I’ Statements, on the other hand, are based on a non-judgemental model, where the person simply expresses how a certain conflict has made her feel and invites the other person to have a constructive discussion.  I preferred the latter as it’s more about owning up to how one feels and taking responsibility for it instead of blaming the other.  Following this, we came up with some conflict scenarios from personal experience in small groups.  We then sat in two lines to do role plays with those topics, using our new dialogue models as tools to resolve the conflicts.  I chose to use the statement ‘You don’t look blind’ for my scenario, which is often expressed in a complimentary way, however this is not received in the same way, at least by me.  While the person role playing my scenario did not appear to realise the importance of ‘blind’ identity to my personhood, when acting out, I think the group understood the message.

In our penultimate Women for Peace session this week, we individually had to come up with four words that define peace, then as a group work together to narrow it down to only four in total.  This resulted in really interesting discussions about how we work together in an environment, which is in principle based on ‘equality’, and how we can apply the lessons learned to our everyday life.  As an ice breaker, we started this session with a game, where one person in the middle said a statement and those who identified with her should have stood up, looking for another chair to sit on.  This game clearly excluded me.  Since playing not fully inclusive games has been the norm almost every session, I was really upset that even after nine sessions things haven’t changed to become more inclusive.  I burst into tears and had to take time out.  I shared my concerns with one of the facilitators and followed it up with writing a feedback email.  While on one hand I feel it shouldn’t be down to me to educate people having felt marginalised already, on the other hand I feel responsible for making people more aware.  I am continuously surprised that most equality trainings are about race, ethnic background and religious beliefs with little attention given to disability.  I wish I wasn’t so accepting and that I was more vocal through the course; perhaps people would have then understood my views better and wouldn’t have accepted some of the non-inclusive practices that have been going on.  Being a minority even in a women’s only group, which is formed around promoting peace is not without its challenges.  I’ll be talking more about this with the facilitators at the next, and last, session. 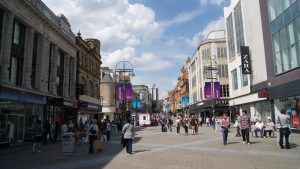 Outside the course, I participated in a focus group with some other equality hub members about how to make Leeds city centre more accessible.  We had interesting ideas about the things we liked about Leeds and the things we didn’t like. From my perspective, I like open spaces such as Briggate and its pedestrian zone, and what I don’t like is the narrow pavements, especially when people leave their black, green and brown bins blocking the path. We also spoke of an ideal Leeds and what we would like to see.  Recommendations included more lighting and safe spaces, audio signs and information (including bus/train timetables) and wider pavements.  All in all it was a productive session for us, but much depends on how much is taken on board by the council when planning a more accessible Leeds.

We have had another lot of snow this weekend, which restricted my mobility once again.  This meant my plans to walk to the Carriageworks  Theatre to see a play had to be cancelled.  It was difficult enough to go to the relatively nearby Hyde Park Picture House to see ‘Three Billboards Outside Ebbing, Missouri’, a beautiful film depicting a woman’s trauma after losing her daughter, and her fight for justice despite being patronised and discriminated against by her own community. 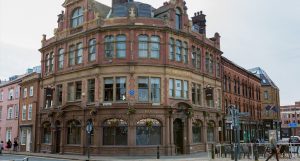 For the second time, David and I went to the historical talks held in Left Bank Centre.  While the first one we went to was about the Leeds Zoo located on Cardigan Road around 1848, this one was about the Adelphi and Garden Gate pubs, located in Hunslet.  I find the talks really fascinating, shedding a wonderful light on some of the treasures in Leeds, both from Architectural and social historical perspectives.  I’m so looking forward to going to the next one.